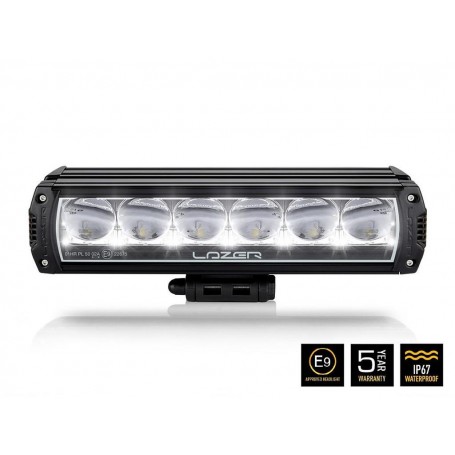 €390.00
Tax included
Notify me when this product is in stock
E-mail:

With a luminous flux of 6.150 lumen, the Triple-R 850 headlamp with positionlight is more powerful than two xenon spotlight or like about six H4 halogen spotlights. The spot light distribution ensures an excellent range of approx. 1058 metres. With ECE approval as a driving lamp, the Triple-R 850 can be installed on the vehicle legally and without registration. The reference number is 45.

They are attached by means of a central, sliding bracket that can be mounted at the top or bottom. A side mounting kit is optionally available.

Developed based on the requirements of professional motorsport, the LED headlights of the Triple-R series set a new standard. The headlamps are available in five sizes from four to 28 LEDs with 11 watt output each and in three versions. They have an all-aluminium housing in black and in some models optionally in silver colouring, a Gore-Tex ventilation membrane and an electronic temperature management by which the individual LEDs can always be operated in the optimum performance range. The special vacuum-metallized reflectors further increase the optical efficiency. The front is made of almost indestructible polycarbonate.

The spot light radiation has been optimised for maximum range by reflectors specially shaped for each individual LED, in accordance with the requirements of rally and endurance motorsport, where driving is at very high speeds. While the headlamps of the ST and T series also illuminate the roadside directly in front of the vehicle, the Triple R headlamps are optimised for range and only achieve maximum lateral illumination from about half the range. Compared to the hybrid light emission of the ST and T series, however, the peak brightness value is up to five times higher.

Due to the mounting position of the LEDs and the indirect radiation via the hat reflectors, there is less vertical change of the light cone during driving. This results in better visibility conditions in rain or fog compared to conventional headlamps with LEDs in the centre of the reflector. Careful adjustment of the light temperature leads to sharper contrast limits and improves visibility.

All Triple-R 750, Triple-R 850, Triple-R 1000 and Triple-R 1250 models are approved as driving lamps according to ECE regulations. Unique to an approved headlamp is the E-Boost technology implemented in the Triple-R 1000 and Triple-R 1000 Elite and realized in the Triple-R 1000, an innovation that is found for the first time worldwide in the headlamps from Lazer Lamps. Outside of public road traffic, the headlamp can be switched to full power by inserting the so-called Boost Cap. The range then increases by up to 950 meters, depending on the model. Due to the flexible configuration of the headlights, they can be used as legal driving lights as well as LED light bars. The installation of an additional light bar is not necessary.

The Triple-R headlights with position light are also approved as position lights and driving lights according to ECE regulations.